Summer 2019 is going to be special and there was no better way to kick it off than with a Gold down the road in NY. The first Gold is always awkwardly placed at the very beginning of summer, with a 50/50 split of kids being finished school vs still having 1-2 weeks left. S2ozzies travelled in abundance, some feeling 20lbs lighter with the weight off school exams off their shoulders and some using the tournament as a nice distraction before finals next week. We’ve argued the strength of Golds previously, but this may well have been the strongest Gold ever hosted in US Squash history. With the formatting of Summer Golds, the pressure of outcome success is lifted slightly, with the opportunity to have a free exposure or two if the tournament doesn’t quite go your way. Our S2ozzies came to perform, but also to learn from the best players in the country. Come Sunday afternoon, it had been another rollercoaster experience with several success stories to share!

Top 3
Kristen and Blake were our highest finishers and reached the semi finals of the GU19 and BU13. Despite playing up an age group, Kristen shocked the U17 division with a 3/0 upset over the #4 seed in the quarter finals, a true masterclass performance. Blake steamrolled to the BU13 semis to face a repeat of the recent Cynwyd Gold final, an All Philly showdown. Both players went down fighting in valiant displays- Kristen faced the current National Champion and Blake lost 3/1, both opponents playing tremendous squash. They responded in true S2 style, saving some of their best squash for last, with Kristen crushing the #3 seed 3/0 and Blake winning 3/1 to both win 3rd place and the Bronze Medal! Huge achievement from both in such a strong event.

Consolation Killers
Rubens and Matt W were the Consolation Killers, as they overcame difficult draws to become Consol champions. Rubens has had the toughest luck with draws recently, consistently drawing a top 4 seed in R2. But he never says shys away from a challenge and this tournament was no different. After pushing the #3 seed all the way, he bounced back to dominate the division through to the last match of the tournament in the finals. In the final, he played some tremendous squash against a 0.2 higher rated player, but unfortunately went down in a five set epic with received a standing ovation at the end!
Matt has a heartbreaking 3/2 tiebreak in game 5 loss in R2, but showed his mental toughness to respond with a strong run through Consolations. The highlight was his final, where he outclassed the opponent for only 13 points total. An unlucky number for the opponent, but it was a destructive response from Matt, who overcame his disappointment of losing R2 with a statement Consol run. Big things ahead for these two!

Elliot and Parth also had good runs in the Consolations, only for both to lose out to Rubens in All S2 match ups. Parth lost in Consol Quarters and Elliot in the Semis. Both boys had good wins in the lead in and showed significant signs of recent improvement, looking mentally, physically and skillfully sharper than ever before.

Classic Plate Classics
What do Tom Hogan and Rubens have in common? A huge engine? Yes, but not the right answer. Speed? Yes, but again not the right answer. Cool hair?! Yes, but again, not the right answer. One more try! The worst luck with draws in US Squash?! Yes! Tom overcame another brutal draw, having to face the top seed in the quarter finals. He stole the first game, but couldn’t quite replicate that level throughout and ended up going down in 4 pulsating games. He responded by defeating two higher ranked players and only dropping one game to win the Classic Plate! Arguably the second best player in the tournament, surely the next event will bring a little more luck with the draw! The points gained from his 1st at Cynwyd and 5th here, will bolster him closer to the top 40 and he’s looking primly placed moving toward a top 32 start before the beginning of his senior season.
Izzy had an unbelievable run in the GU17s, coming in unseeded and had a phenomenal run to the Quarter Finals. The points from her top 8 finish will bolster her closer to the top 50 and this is going to be a big summer for her!

Additional Highlight
Ethan’s ‘Match of the Tournament’ was a 3/2 Consolation win, showed new level of mental and physical toughness to overcome a 8/5 game 5 deficit. He also got a game from a top 8 seed in R1.
2.

A great tournament filled with depth and the top talent in the country. We’re very proud of the performances, all the learning experiences gained and ready to put an action plan into place to make the necessary improvements and developments in Summer Camps next week! We love having the additional court time and finally rid of school stress, it’s the perfect time to make that next big jump. See everyone at training tomorrow! 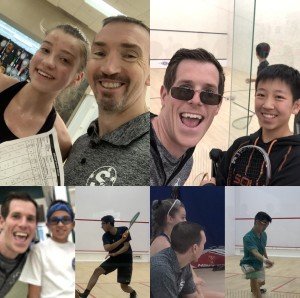