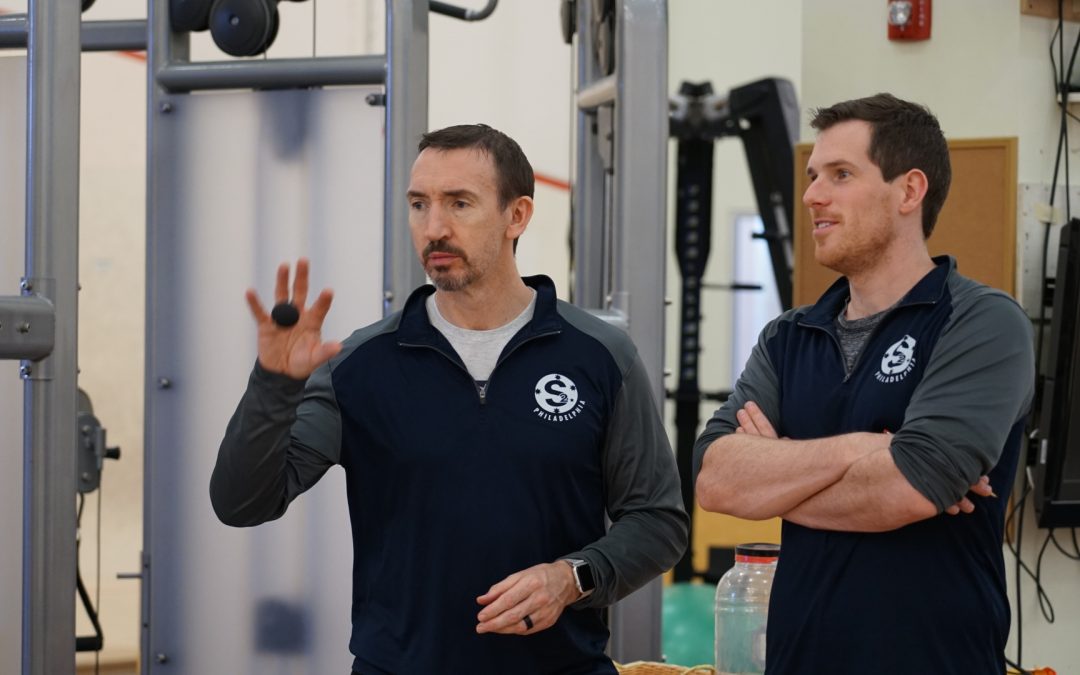 After a whirlwind start to 2020, the second weekend of the new decade arrived and we were desperate to keep the momentum flowing. The week started with all the kids returning back to school and concluded with S2ozzies spread across 4 events nationwide; home P2P, our 5th of the season, Chicago Gold, Baltimore Silver and Merion Bronze! If that wasn’t enough, we also had several S2ozzies travel to the iconic Tournament of Champions PSA event at Grand Central Station NYC whilst over 20 Alums spread across the country as the biggest weekend on the CSA calendar this season had several of our favorite faces pitted against each other and rival programs! After the record breaking final weekend of 2019 concluded with 2 winners at Chelsea Piers Gold, 2 @Berwyn Silver and 2 at NYC Gold, the benchmark was set extremely high to kick off 2020. Could we rival the 6 winners?! How about 6 winners at the home P2P, topped with at least 2 winners each at all the Gold, Silver and Bronze (3) events around the country = 6 + 7 = 13 Champions crowned?!?! April Fools day is 79 days away isn’t it?!? Let’s start with a college update to keep the suspense rolling…surely that couldn’t be true?! Could it….?! 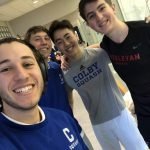 If having 60+ S2ozzies in action at 4 events around the country, we also had 20+ of our favorite Alum spread across representing their respective colleges in Top 32 match ups. We apologize as we know we’ve missed some Alum in this report, but due to late results being posted, here’s the headlining highlights starting with our two most prolific Alums – Sean and Elle. Individually, they won a combined 30 JCT titles in their tenure as Scozzies and still hold the coveted titles as the most successful junior players ever, with more JCT championships than any other male or female player.

Harvard – Sean H, is captain of Harvard this year and has led them to number 1 ranking in the country after 9/0 win over Princeton and 8/1 over UPenn this weekend. Sean went undefeated and has still only ever lost to 1 player in 4 years of college squash! A S2ozzie legend. 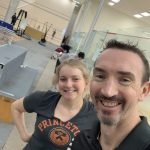 favorite. Elle played #2 for Princeton as they crushed Dartmouth 9/0, before an epic 5/4 match with Harvard, which the Crimson dramatically clinched victory.

Yale – another former US Number 1, Eric represented Team USA at 3 World Championships and won 3/3 playing #5 for Yale. He inspired his team to wins over Cornell, Columbia and Amherst, which saw him line up against Charlie who played #2.

Cornell – Alexis represented S2 at #5 in her freshman year at Cornell, they defeated Abby’s Brown 6/3, before falling to Yale.

Colby vs Wesleyan – our favorite picture of the weekend saw Jason, Phil and Tyler pitted against John and his Wesleyan team mates. Colby were victorious this time 9/0!

UVA – Peter M played for Virginia and inspired them to a huge 5/4 win over Western Ontario and then a 9/0 over Vassar.

F & M – Teddy won 4/4 and Zoe 2/2 and both went undefeated at #7 for Franklin and Marshall as they defeated St Lawrence, Hamilton and Chatham, losing a close 6/3 to Western Ontario.

MIT – Bill went undefeated at #5 with wins over Bowdoin and Bates.

Dickinson – MJ has a huge win at #8 for Dickinson as they upset St Lawrence and Hamilton, before falling to Western Ontario.

P2P #5 – 40 entrants, 6 Division Champs
The most historic weekend in S2 history began with 40 entrants at our 5th P2P of the season, battling it out for 6 divisional titles. So far, Coaches Sam (two titles), Jamie and Lyall have won all the events and sit atop the ranking list with perfect 1000 scores. Event #5 welcomed Shaam and Reghan back from the British Open where they represented Team USA and achieved top 16 finishes against the Worlds Best. Could any of the juniors break the coaches unbeaten streak of 15 consecutive titles and become the first junior Premier Division winner of the decade and only the 4th ever in 8 years of P2P events?! 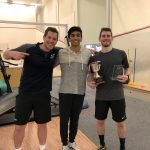 Coach Jamie was unstoppable and steamrolled through to win the Premier Division without dropping a game. He faced a surprising finalist in Sameer, who was outstanding in his semi final match up against Shaam and managed to defeat his EA team mate for the first time in several years. Jamie beat Brandon W, Nikhil and then Sameer to start his 2020 in style and aims to build from his current 185 World Ranking, targeting a rise into the top 150 in the near future.

Colten returned from the UK in the best form of his career, after sealing a 3rd place finish at the Scottish Junior Open (originally unseeded) and kept his fine run going, defeating Melanie to win the Division 2 title. Rubens and 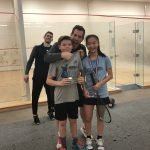 Aru were 3rd and 4th and all these guys gained the perfect preparation prior to JCT #4 next weekend in Stamford. 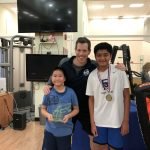 The P2P Player of the Season so far definitely goes to Brandon Bin. He’s now reached consecutive finals at 3 events and has above an 80% win rate for the season, the best statistical percentage by any of our junior players. Event #5 was another great one for the young phenomenon, defeating Rohith 3/2 in the Division 3 final. Liz won 3rd and the Bronze medal, over James in 4th. James was MIP of the day after wins over Kevin and Rishaan and was lucky enough to celebrate with a trip to the Tournament of Champions in NYC on Saturday and Sunday to watch his favorite players in action!

Division 4 was won by William M after career wins over Bella and then Reghan in the finals. Division 5 was one by 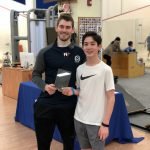 Arjun V after he won Match of the Day in a 5 set thriller over Max R and Beatrice won the Division 6 title after a closely fought final over Amelia. Well done to all our newly crowned champions and everyone who participated.

S2 takes Gold in Chicago
6 home P2P Winners, how many external Champions could we manage?! Incredibly we had 4 S2ozzies finish inside the top 3, including 3 finalists. Take a bow Parth Khera, one of the most improved players on the US Squash junior circuit and now a first time Gold Champion! He broke 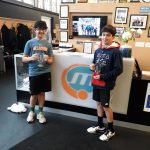 records in 2019, as he improved by over 1.0 rating and jumped over 100 spots in the rankings… now he closes in on a top 20 ranking for the first time. He only dropped 2 games all weekend and displayed an impressive consistency showcasing this most certainly will be the first of many titles for the young superstar. So proud of your efforts… keep the hard work up and we know there’s bigger things to come. 1 Champion down, how many more to go?! John Gunton couldn’t quite seal the U17 title and lost out to home favorite in the final. John make big steps over the weekend and will reap the rewards of a major ranking boost still in his down year at U17.

Christa also made the final of the GU17 division in scintillating style and Kayla capped a truly memorable weekend for S2ozzies in Chicago, as she also exceeded expectations and sealed 3rd place in the GU11 girls!

Silver Success sealed with Golden Performances
After the success of Parth, Christa and Kayla in Chicago, we had a group of 5 kids in Baltimore desperate to keep the momentum going. Step up Alec S and Henrietta S! Two of our hardest working Gold SAS Members, they managed to bring home the U15 titles from the Baltimore Silver. Both divisions were stacked with talent, but our guys stepped up and rose to the challenge to play their best squash of the season so far and come back to KOP victorious!

Brilliance at the Bronze, History is Made! 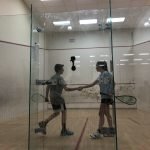 1 winner at the Gold, 2 Winners at the Silver, could we find a winner at the Merion Bronze and break history once again?! We’ve never had winners at 4 different US Squash events on the same weekend, never mind multiple winners!! Our final championship victories couldn’t have happened to nicer and more deserving players. Well done to Eva (U11), Jake (U15) and Morgan (U17) who sealed wins and meant we had at least 1 winner at the Gold, Silver and Bronze events, 6 winners at the P2P and 12 total Champions across the weekend! Very proud of Eva and both boys who have patiently put together game plans and structure capable of lifting a championship and thoroughly deserve their success. Well done also to Finn, who finished as runner up in the BU13’s.

It couldn’t get more exciting. 12 newly crowned S2 Champions, another massive well done to; Parth (Golds) Alec, Henrietta (Silver), Eva, Morgan, Jake (Bronze), Jamie, Colten, Brandon, William, Arjun and Beatrice (P2P) and a record breaking number of Alums in action around the Nation representing their respective colleges and S2. One for the archives, we won’t forget this weekend any time soon! 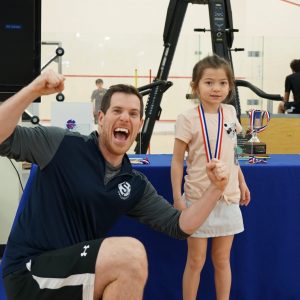