S2ozzies travelled in abundance down to Charlottesville, VA for the second Gold of the 2019 Summer Series. The McArthur Centre is situated at UVA and is one of the finest squash facilities in the world. Two all glass courts, 14 in total, there is no better layout for an event and as expected, everyone came to play. We argued that the Westchester Gold two weeks ago, could have been the strongest Gold in US Junior Squash history, but this past weekend might even have topped it. The level of squash showcased throughout was incredible, with every round posting seeding upsets. By conclusion of play on Sunday afternoon, we felt like we’d been at Six Flags for 72 hours. The rollercoaster journey brought 8 S2ozzie quarter finalists, but could any of them go on to win the coveted UVA Gold title?!

8 Quarters become 2 Finalists… Becomes ? Winners?!
Christian Shah has been a S2ozzie for 8 years, since he was 9 old and has found a second home at the McArthur Centre. The journey began 12 months prior, went he went on a unprecedented run through the BU17 division at the 2018 UVA Gold, winning the title without dropping a game. That title sparked a summer to remember, where he went on to win Cincinnati two weeks later and collected the perfect 2x 2000 point bonus to bolster his ranking and rating before the 2018/19 season. His rise from a top 32 player in summer continued to increase at an unseen level and by March 2019, he arrives back in UVA at Gold Nationals as a top 5 player in the country. But even that wasn’t enough and the fairytale continued at the McArthur Centre, as he went on another heroic run through Gold Nationals to reach the final (only dropping 1 set) and a chance to complete the dream and win a National Championship. His unbeaten run at UVA finally came to an end in a high caliber final, as he settled for 2nd in the country. But the fairytale season started and ended at UVA and that journey will be a fond S2ozzie memory forever.

This season, his senior year, he ages up to U19’s in one of the strongest recruiting classes ever. He came into his first U19 tournament as the #8 seed and was desperate to pick up from where he’d left off. Boy, he did exactly that this weekend! In R2, he steamrolled the 5.5 rated #9 seed 3/0. In the quarters, he came from 1-0 down to beat the #1 seed 3/1 and then in the semis, matched that score line to defeat the #4 seed. There’s something about this guy being seeded 5-8 at UVA and then upsetting the odds to reach 3 consecutive finals here from that position! His finals record stood at 1-1, could he achieve the unthinkable and repeat?! Two UVA Gold titles in 2 years, surely not?! Well yes, he sure could and he did it in the most scintillating of style. Up against the highly-rated #2 seed, Christian was inch-perfect from the first point until the last. It was a 30-minute masterclass and he only dropped a total of 14 points. Glass Court 1 truly brings the best out of Christian and everyone in attendance applauded the level he displayed. Unbelievable achievement Christian, we’re very proud of ya!

Our other finalist was the man of the moment, Blake L! After winning the Cynwyd Gold over Memorial Day weekend, he finished top 4 at Westchester and then returned to the finals here at UVA. His playing style is a joy to watch. His deft touch and array of angles make him so difficult to anticipate against and many U13 players has had nightmares about the strategies he implements and so perfectly executes. In the finals, he met his match, as the opponent masterminded a performance to remember. 2nd place was still a huge achievement and joined Christian aboard the podium!

Super Six
The other six quarter finalists all had their own success story to share. Matt W had a phenomenal weekend, which was so close to bringing him his first ever Gold title. After a thrilling 3/0 quarter final win, he heroically fought back from 2/0 down against the #2 seed in the semis. The match was officially recorded at 75 minutes and it involved some of the most brutal squash seen all weekend. The breaks in game 5 didn’t quite go his way, but it was a top candidate for ‘match of the tournament’ and both players exited to a standing ovation from the 50+ spectators. The scheduling meant he had less than 2 hours to recover before the 3/4 play off, but the opportunity at a rematch against the opponent who beat him in 5 at Westchester provided the sufficient stimulation to supersede the lack of recovery time! High on adrenaline, Matt showed unbelievable mental and physical toughness.

Tom has had an incredible summer already, winning Cynwyd Gold and rising into the top 40 of the BU19s for the first time. Coming in as the 6th seed here, he had a big 3/0 victory in R2 over a 5.31 and then faced the 5.62 3rd seed in the quarters, coincidently also a Haverford rival! Tom executed the perfect game plan to go 2-1 up and held several match balls. However in heartbreaking fashion, his opponents resilience wouldn’t break and he somehow fought back to defeat Tom in 5. It was a physical war and Tom left absolutely everything out there. His efforts were incredible and somehow, he still managed to recover to win the Classic Plate rematch of his Cynwyd Gold final. In the 5th place playoff, he once again brought his A game and capped another great weekend finishing higher than his original seeding. He also hit two of the best shots all weekend, a cross court backhand followed immediately by a cork screw wall roller!! Huge things ahead for this young man this season, that heartbreaking loss will 100% transpire into even bigger achievement in next seasons JCT’s.

Mitav autocorrects on the iPhone to Miracle. Normally I’d have to correct it, but for this weekend, there was not a more appropriate word! The young man is finally back to full health after a frustrating 2018/19 season hindered with injuries and it’s a joy to watch his creative playing style thriving on the big stage. After beating the #7th seed in R2, he couldn’t quite upset #2 seed in the quarters, but did recover to beat #6 seed in the Classic Plate to have two top 8 wins for the weekend after arriving unseeded. It also guaranteed a top 6 finish, but he wanted 5th and was desperate to join Tom at that finishing position. Unfortunately the top seed had been upset in the quarters and was now standing between Mitav and the Classic Plate Championship. The miracle man was so close to a huge upset, as he fought from 2-0 down, winning game 3 and then coming sooo close in game 4. He couldn’t quite convert game ball and unfortunately lost it 16/14. 6th Place was still a great achievement and unquestionably, bigger things ahead for this season from Mitav.

Lindsay Lee had a memorable weekend, coming in as an unseeded underdog, going on to have two upset victories on route to a 6th place finish. This girl never gives up and time and time again, she battled back to victory; R1 from 2-1 down, R2 1-0 down and in the Classic Plate she trailed in scoreline at 1-1. The huge highlights to savior were victories over top 50 players and the reigning Silver National Champion. A big stepping stone to even bigger things ahead, an exciting season coming up for Lindsay!

Colten and Rehgan both finished 6th and 7th in the U13’s. Colten is still in his down year and Rehgan played up despite only being 9 years of age! A big learning experience for both, who have extremely bright futures ahead and are ones to watch!

8 in top 8 and still more Finalists!!!
I’m not sure we fully explained just how deep this tournament was! The level of play on Sunday was so impressive and we managed to have Jacqui, Shivani, Sean and Margo all go undefeated on Saturday to reach their respective Plate finals. Jacqui was first up in her first ever U17 event and her first singles tournament in over 6 months! She took a game in R1 from a player 0.3 higher rated and then played outstandingly to win 3/0 in the Plate semis and finals to lift the trophy! Shivani and Margo then joined Jacqui as the Triple Champions, both winning 3/1 in the final. Sean unfortunately lost out to a tough opponent, but 3 wins outta 4 was still an incredible stat!

Consolation Killers
With all the main draw and Plate successes, our Consolation Killers didn’t nearly get the airplay they deserve. Aru had a PB finish coming 11th in a deep U13 draw, Anika heroically battled injury all weekend and still managed to match Aru’s finishing position. Nikhil and Neil had two of the matches of the weekend late on Saturday evening. Both lost 3/2 barnburners to higher ranked players, but put on a spectacle showcasing all their skills to the appreciative audience! Neil in particular played the match of his life and was only a couple points away from defeating a player 0.4 above him, in what would have been a career result for him. Ethan L celebrated his 14th birthday on Thursday and then immediately delivered his first top 16 finish in the division! Great job birthday boy! 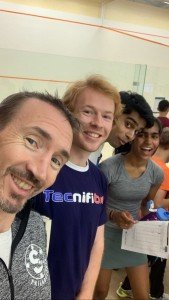 What a weekend it was in the sunshine of Virginia. Some incredible individuals performances and results, and so many learning experiences gained. Back to the drawing board at camp next week to make the necessary adaptions and game tune ups, and we have a great training block ahead to make sure we’re ready to rock the 2019/20 season once it rolls around in 9 weeks time!