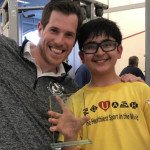 It was a historic weekend for S2, as we hosted our first formal US Squash event since the Scozzie evolution to S2 or Scozzie 2.0 on March 1. The holiday weekend presented some scheduling issues, but the lure of an action packed, condensed 1.5 day tournament saw 115 entrants arrive eager for success. S2 members packed all 9 age divisions from U11-U19 and aimed to kick off the next chapter in style, one week after Bronze Nationals closed the formal portion of the US Squash 2018/19 seasons.

BU13’s
The man of the moment, Parth K! The second seed in the BU13’s had a scintillating weekend, steamrolling the BU13 division without dropping a set. The squash presented was closer to a 4.0 level rather than his current 3.45 and he showed signs that he’s ready to accelerate his game to that next stage. His final was an All S2 finale against one of our newest members, Charlie R.

Grant was so close to making it an S2 1-2-3, but lost out in a tough Bronze medal play off. Devin L added extra silverware by winning 4 matches in succession to win the Consolation event and that was immediately followed by an All S2 Classic Plate final between Read and Brandon. Read won that battle meaning we had the 1st, 2nd, 4th, 5th and 6th place finishers alongside the Consolation champion. It was S2 dominance in the largest draw across all the age brackets!

U15’s Boys and Girls!
The success of the BU13’s would be impossible to replicate, but both the BU15 and GU15’s gave it one heck of a shot! Ben pushed the number 1 seed all the way in a four game barnburner semi final, only to lose out 3-1. A great performance against someone rated 0.35 higher and even more impressive, was his immediate response, bouncing back to win the Bronze Medal and 3rd place with a 3/1 victory in the 3/4. Shivani joined Ben on the podium in the girls division, coming through as an unseeded underdog to almost have a miracle weekend. She beat the #7 and #2 seeds 3/1 in succession to reach the semi finals and an opportunity to reach her first ever final. Unfortunately, nerves got on top of her and although she lost out in the semis, she saved her best performance of the whole weekend for the 3/4 play off. She won 3/0 to win 3rd and capped a very memorable weekend showing incredible improvements throughout all aspects of her game.

Alex and Max put together one of matches of the weekend, in an All-S2 Consolation semi. Alex heroically fought back from 2-0 down to win 3/2 and showed immense resolve in numerous high pressured situations. His abilities in ‘clutch’ moments once again shown through in the final, as he fought back from 2-1 this time. It was consecutive 5 game comeback wins in the space of 3 hours and his mental and physical resolve to come through that was hugely impressive to the observing eye. 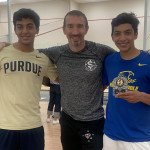 Yes, the success stories continue… it truly was a weekend the remember! Corey was another headlining story, with his fairytale run to the BU19 finals, exactly three weeks after lifting the EA Silver coming through the event as an underdog. That time he defeated someone rated over 0.3 higher and he was ever so close to going one step further this time around. In the final, he faced an Egyptian National player (rated 5.45) and here for boarding school. Corey was over 0.8 lower and statistically wasn’t meant to be close. Never underestimating Corey has been something we’ve become more and more accustomed to and this was no different. He fought valiantly for over 45 mins and had opportunities in games 1, 2 and 3. Although he snuck game 3, he couldn’t quite find the energy to force a 5th and ended up finishing 2nd place. A great performance and a match he should hold his high after.

Patrick came 6th in the same division, including a 3/0 win over Braiden in an All S2 semi final. Abby and Maya achieved top 4 finishes in the GU11 and GU13’s and Maya just missed out, finishing 5th. Other top 8 finishers included;
– Kennedy U17
– Bella U15
– Max U11
– Morgan BU17 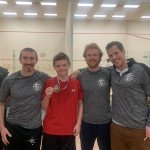 What’s Next
A roaring success to cap a thrilling weekend. We have 6 weeks left of Phase 1 before Summer Programming kicks off and can’t wait to end the season in style. The penultimate P2P is next event on the calendar next Saturday and we’ll see if anyone can shift Jamie and Sam from atop the rankings. Hope everyone had a great holiday weekend, see y’all at training on Monday.