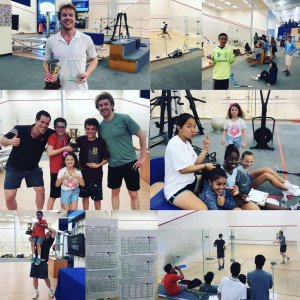 The concluding P2P brought our 2018/19 season to a close. It was the 8th and final leg of the series, which had a total of 101 participants register and brought a total of 42 divisional champions over the course of the 9 month season. Always a major highlight of the S2ozzie season, this year was no different and once more, the championship came down to the very last match – Coach Jamie vs Coach Sam in the Premier Divisional Finale. Both had won 3/3 tournaments and carried a perfect 1000 average into the final event. With everything on the line, Jamie beat Shaam 3/1 and Sam defeated Charlie 3/0 to create the dream finale! Read on to hear who prevailed alongside all our headlining stories.

Premier Division
What a match we were treated too! Sam was just back from reaching R2 of a PSA Challenger Tournament, losing in a heartbreaking 5 games to the eventual finalist. Jamie has climbed to 180 in the world in his record breaking first season as a professional and we were extremely lucky to be able to watch the 2 warriors lock horns to try and win the 2018/19 Series. Sam drew first blood, patiently pressuring Jamie until opportunity prevailed and then executing an attacking array of magic. He led 2-0. Jamie prides himself on the physicality of the sport and it’s never over until it’s over against him. His mental toughness shone through, as he began to take control positionally and executed some wonderful winning shots. Game 3 went to Jamie, but he still trailed 2-1. The 4th was the best yet, as they both threw absolutely everything at each other and left it all on court. Sam won it and dethroned defending champion Jamie as the new P2P Series Champion. Congratulations to both our pros for a phenomenal season and taking their games to the next level, whilst representing S2 in style. Well done to Shaam on sealing 3rd place over Charlie and broke our junior record with an astonishing average of 970 points across the season, including his first title at event #5. Sameer, Nikhil, Christian and Matt W made out the Division and the top 8 spots.

Division 1
Match of the day came in the D1 final as US U13 Number 1 Winston Tang came up against US U15 Number 11 John Gunton. The largest crowd of the day gathered to watch the spectacle, as Winston heroically battled from 2-0 down to come back and win 11-9 in the 5th. His best performance of the season and a fitting end to a monumental season for Winston, who won 3 JCT’s and carried the #1 ranking all season. Grady defeated Maya to win 3rd place and James beat Colten to win 5th.

Division 2
Another barn burner of a final, saw Render and Max S battle it out in another thriller. Render bounced back after a tie break defeat in the deciding set of qualifying, to win 3 matches back to back and be crowned D2 champion. Max S pushed him all the way in the final and both displayed a significant increase in playing level above their current rating suggests. They should be extremely confident going into the Cynwyd Gold next weekend and this was the perfect preparation event. Rubens won 3rd place defeating Aru in the Bronze Medal match up.

Division 3
Brandon was brilliant in Divison 3, as he steamrolled to the title defeating a 3.41 3/0 , 0.25 above his current rating. His performance against Abby was his best of the season and a great building block for bigger and better things ahead. Henrietta and Chhavi played out a great 3/4 play off and Kennedy and Bella decided to share 5th Place!

Division 4
Our 5th division was also packed with 8 players battling for glory! This was arguably our most competitive division and every match went to the wire. Dylan copies Winston and despite going 2/0 down to Ajay in the final, fought back to win 3/2 and he won his first ever P2P title! Our youngest P2P competitor, Peter won the Bronze medal and capped an excellent first season for the future superstar.

Season Awards!
On top of Sam, Winston, Render, Brandon and Dylan’s success in becoming the winners of Event #8, the P2P season was capped with our annual awards ceremony. A massive congratulations to;
MVP Kevin Zhu – he played in all 8 P2P events and was the deserved winner of the 2018/19 MVP award.
MIP Bella Bin – Bella improved from a 260 score in event 1 through to a 625 score in event 7, an amazing 365 improvement. Our Most Improved player throughout the series, keep up the hard work Bella!
Top Junior – Shaam Gambhir. Shaam had a record breaking season, winning 1 P2P and finishing with an incredible 970 average, our highest ever total for a junior player. He finished in 4th Place overall, only behind Coaches Sam, Jamie and Lyall.
Excellence Award – The Award to the individual who went over and above every tournament from officiating to sportsmanship to attitude. Congratulations to William Meyer, no one deserved it more!

Our P2P Series will return in September and the official season end will next weekend at the Cynwyd Gold! What a year it’s been, stay tuned for our last report of the season next weekend detailing arguably our most successful season to date and historically our first as S2 Squash! 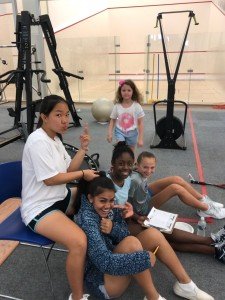